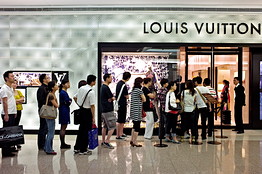 Up to now, many global companies, especially luxury brands, have focused first on building a presence in China’s biggest cities such as Beijing and Shanghai — called Tier 1 in marketing-speak — that boast a population of 8 million or more. The thinking? The bigger the city, the higher the earning power and the more money there is to spend on luxury goods.

To read the complete story, please click on this link which will take you to the Asian Wall Street journal: In China, Even Small Cities Spend Big.